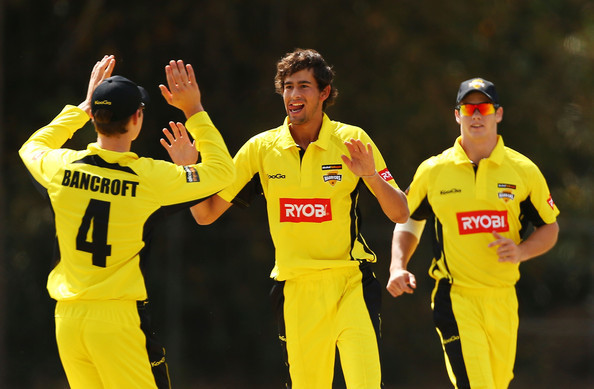 Ashton Agar celebrated his 21st birthday with a man-of-the-match performance to help Western Australia rally for a 28-run victory over Tasmania at North Sydney Oval on Monday.

WA had been struggling before Ashton scored a very useful 64 off 60 deliveries, sharing a 79 run partnership with Rimmington. He also managed to secure the important wicket of middle-order batsman Jordan Silk.

“I just tried to be nice and positive and just play good cricket shots,” Ashton said.

“It was a hard situation as I had to work myself in, but I knew if a few of us could get going we could post a good score.

“I felt really good (bowling). I have done a lot of work during the winter dedicated to my bowling and it feels like that is starting to pay off now.

“I feel like I know my game now. Last season was a massive learning season for me, and I have taken a lot out of that.”

Ashton joined the Warriors prior to the 2012-13 season, moving across from Victoria. The young left-arm spinner emerged as a major prospect in the latter half of his first year in WA, before earning a call-up to the Australia A squad for their British Isles tour in June 2013. Ashton took 19 wickets in five Bupa Sheffield Shield matches and five wickets in two Ryobi Cup games. He went on to make an incredible Australia debut in the first Ashes Test at Trent Bridge, where he made a record-breaking 98 batting at number 11.

Ashton has since lost his place in the Australia side during the Ashes series but remains in the frame for selectors.

Agar, he said, was “built for the international stage’’.

“Ashton batted beautifully yesterday — it took me back to his innings at Trent Bridge. He’s a beautiful striker of the ball, he’s fearless and his bowling, which is the important part to get him back into the Australian team, is only going to get better.’’

It is the third win on the trot for the second-placed WA who now have one hand on a finals’ berth, their next match is against the Blues on Wednesday.