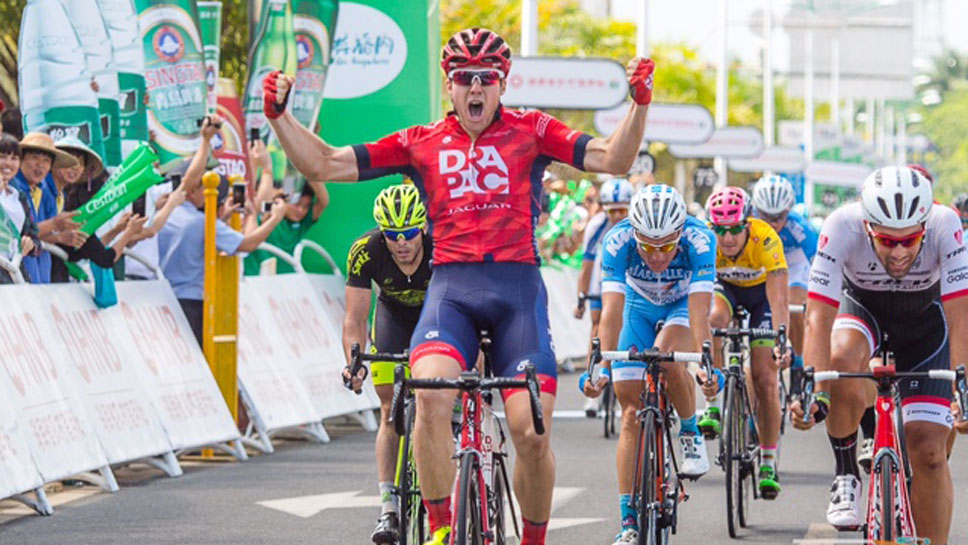 In another sprint against the wind, a different stage winner emerged with Australia’s Brenton Jones of Drapac taking the final win in Wanning Xinglong.

Jones passed third placed Benjamin Giraud (Marseille 13-KTM) on the right side to put his name on the record book of a HC race for the first time in his career after winning the prologue of the 2.1 Tour of Japan in May this year.

“The sprint was very messy because so many riders wanted to win today”, the Australian declared. “I found the right gap with 200 metres to go. It was nice to come up with a win after crashing in stage 1 on the same finish. I think every bunch sprint this week has been with a head wind so I must have come from behind today. I got a nice and clean run to the finish. I’ve had a great support from the boys all week. It’s nice to win this last stage.”

Chinese media were amazed to hear the story of the 23 year old whose life had been endangered in an accident. “Four years ago I had a nasty crash in racing the Australian national road series”, Jones explained. “I was placed in induced coma at a hospital for a week. I was off the bike for three months. It was a serious brain injury. I was just lucky to survive. To come back from that and to get my biggest victory today, with the support of the team, I can’t thank all those who helped me along the way.”

“This was my first Tour of Hainan and I love it”, Jones concluded. Read the full story.