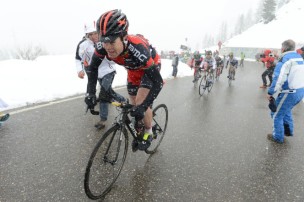 With Cadel constructing his season around claiming the Giro d’Italia, BMC  have announced a strong eight man team to clinch the maglia rosa in Trieste, on June 1. Having secured the overall classification at the Giro del Trentino, Cadel will start the race as one of the top favourites in what will be his fourth Giro.

“I am delighted with the Giro team we have,” Cadel said. “I think it will be the best one we have had as a team and I am very happy with the support I will have. They are absolutely committed riders and these are really my guys I trust and know I can rely on.”

Former Olympic gold medallist Sammy Sánchez makes his grand tour debut for BMC, and his 15th in total at the Giro. Sánchez will be a key ally for Cadel throughout the event and Cadel stated his delight with the Spaniards inclusion in the roster.

“We are both reasonably experienced riders who have similar habits and a very similar way of racing,” Cadel said. “Having a lieutenant like Samuel is far more than I could have hoped for.”

Since making its grand tour debut at the 2010 Giro, Sport Director Fabio Baldato, said the quality of the squad for the race exceeds any previous edition that BMC has fielded a team at a three-week event before.

“It is an amazing team, a strong team,” Baldato said. “Coming from our success at Trentino, a race which brought us a lot of confidence and motivation, I know the shape is there and the team can work well around Cadel.”

With a team time trial suiting BMC and opening the 97th edition of the race, riders will also face individual time trials of 42km and 26.8km as well as several decisive mountain stages. Baldato is confident the team has the right mix to perform well against the clock to then supporting Cadel when the roads start pointing up.

“For sure, the last week will be pivotal,” Baldato said. “Cadel has seen most of the route and most of the roads of the time trials, or he knows them from last year or past Giro’s. So we will be confident from the start that we can do a good team time trial for Cadel and for the morale of the team.”

Cadel rode the Giro last year with limited preparation and finished third overall behind winner Vincezo Niabli (Astana). Now he comes into the Giro with good form from the Australian calender and a win at the Giro del Trentino.