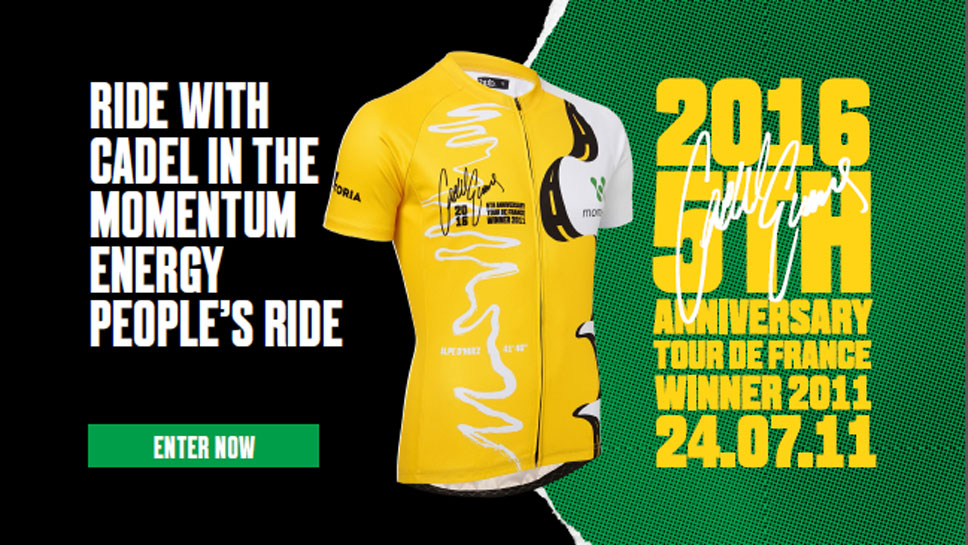 The Minister for Sport, Tourism and Major Events, John Eren, said the yellow jersey would be an exclusive piece of memorabilia for participants in the Momentum Energy People’s Ride.

“The commemorative yellow jersey is a special memento for participants in the Momentum Energy People’s Ride and recognises an amazing achievement and wonderful milestone in Cadel’s historic victory at the Tour de France in 2011.

“The jersey features Cadel’s signature, a map of the Tour de France course and key facts about his triumphant victory ride including the date, distance and his time.

“Participants in the 2016 Momentum Energy People’s Ride will have the honour of wearing the yellow jersey and the rare opportunity to ride with Cadel Evans, the first ever Australian Tour de France winner,” Minister Eren said.

Cadel Evans commented on participating in the Momentum Energy People’s Ride which starts on the beautiful Geelong waterfront, travels through his home town of Barwon Heads and passes by Thirteenth Beach, Torquay, Bells Beach and the rolling hills around Moriac.

“The 2016 Momentum Energy People’s Ride follows the same route as the Elite Men’s and Elite Women’s Races which incorporates some of my favourite training roads.

“I am looking forward to joining the sea of yellow jerseys and riding shoulder to shoulder with the thousands of recreational cyclists participating in the ride, and as the event sold out in 2015 I encourage everyone to register now to avoid missing out,” Evans said.

The CEGORR is Australia’s ultimate weekend of cycling action. On Saturday 30 January there is the Momentum Energy People’s Ride and the Elite Women’s Race followed by the Elite Men’s Race on Sunday 31 January, featuring many of the world’s best cyclists on the beautiful Bellarine Peninsula and Surf Coast.

“The CEGORR offers a challenging and authentic one-day course and is one of the most spectacular and scenic rides that I have experienced in the world,” Evans added.

To go in the draw to win the Ultimate Cadel Evans “Behind the Scenes” Experience including a meal with Cadel, behind the scenes tour and a signed jersey, enter the Momentum Energy People’s Ride prior to 2 December 2015.

“In 2016 we are really looking forward to Cadel Evans – iconic Australian cyclist and winner of the Tour de France – participating in the Momentum Energy People’s Ride. It’s a great honour to have Cadel, a fantastic sport ambassador who has captured the hearts and minds of people all around the world,” Mr Geason said.

Stay up to date with race news, team announcements, training tips and all you need to know to enjoy the ultimate weekend of cycling at www.cadelevansgreatoceanroadrace.com.au and by following @cadelroadrace on Twitter, Instagram and Facebook.