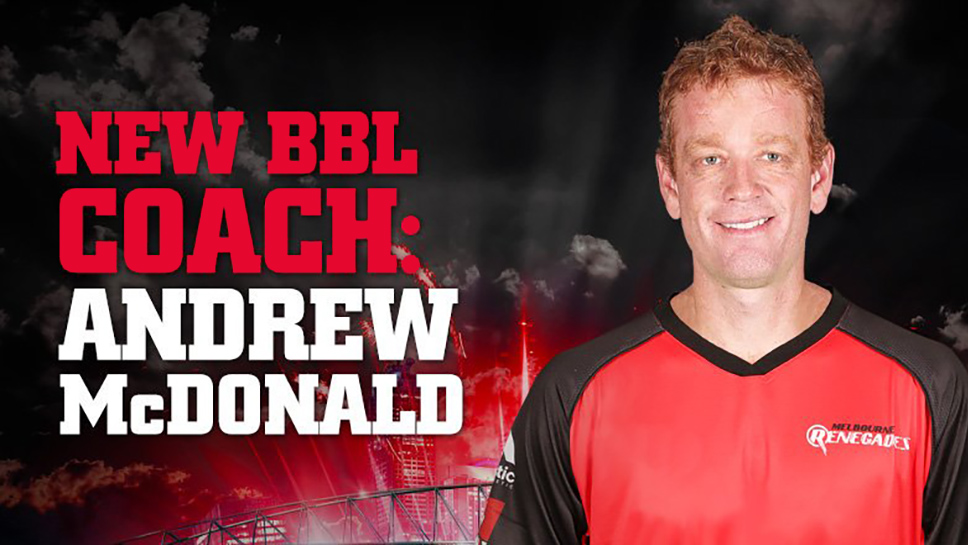 Former Australian all-rounder Andrew McDonald has signed with the Melbourne Renegades as the club’s new BBL Head Coach, it was confirmed today.

The 35 year-old Victorian played four Tests for Australia and was the inaugural captain of the Renegades in BBL|01. He has been coaching English County side Leicestershire since 2014.

“I’m delighted to have been appointed Head Coach at the Melbourne Renegades and it’s a role I’m very much looking forward to,” McDonald said.

“The Big Bash League is extremely competitive and you do need some luck in this league but you create that as well. The smarter we play as a team and the more pressure we can put on our opposition, the more we’ll find ourselves in winning positions,” McDonald added.

As a player in red, McDonald scored two half centuries in the first season with the Renegades and averaged 32.80 with the bat.

“There’s obviously the historical connection from the first season so it’s really nice to be able to come back to Etihad Stadium as coach and work with Aaron Finch and the team to deliver the success that this team is built for,” McDonald said.

Melbourne Renegades CEO Stuart Coventry said the club was pleased to appoint McDonald, who takes over from David Saker, now coaching with Australia.

“We had a good field of people who were very interested in this role and we’re really pleased Andrew has agreed to come back to Melbourne Renegades as our next coach,” Coventry said.

“Andrew has a wide breadth of experience playing for Australia and from a T20 perspective in the Indian Premier League, the BBL and now in his coaching role at Leicestershire. He obviously knows plenty of the players in our squad so he’ll be a great fit to inspire our team towards a finals appearance this season,” Coventry added.